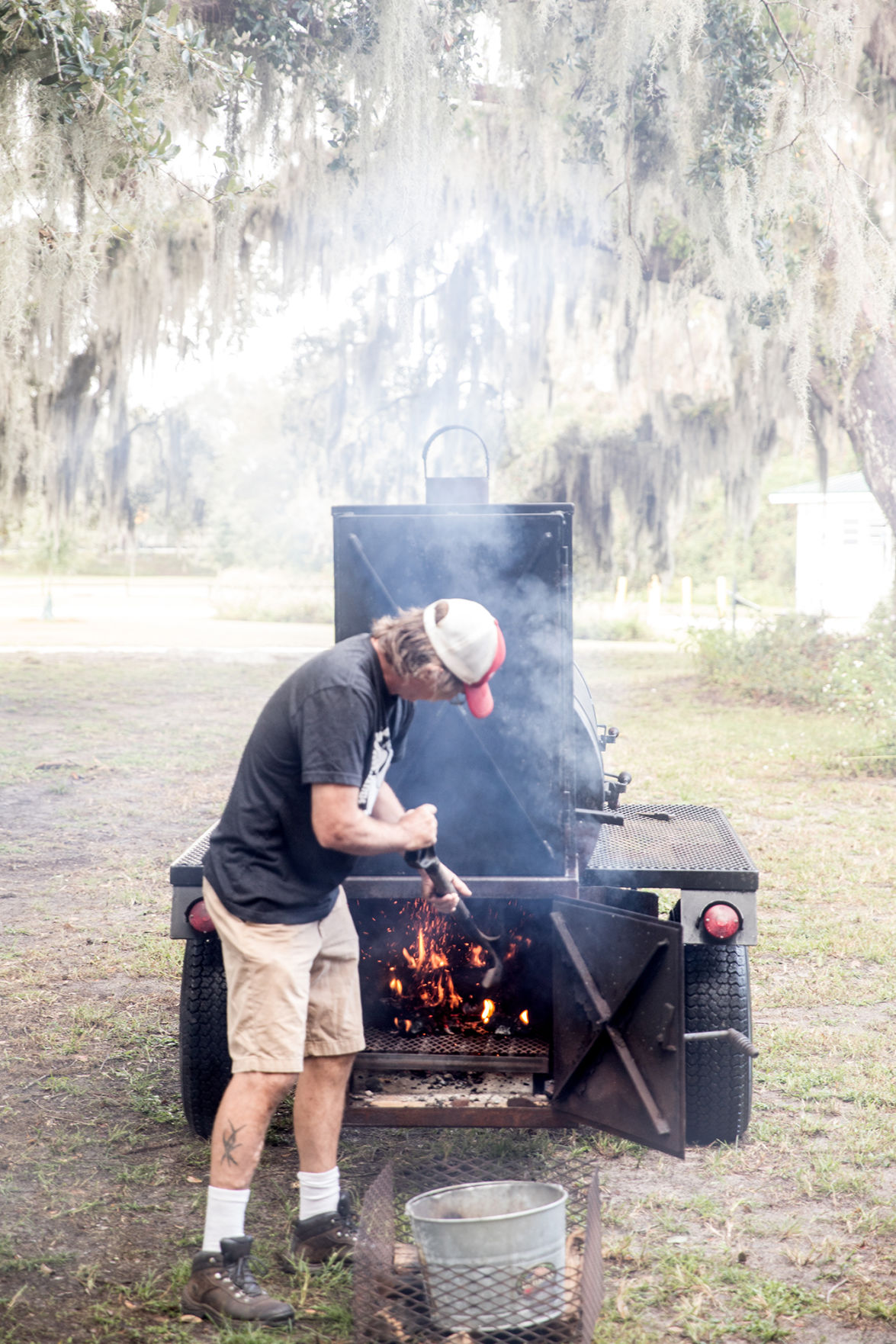 Fall in the Golden Isles can’t be beat. It’s a season of gathering around firepits as oysters hiss their ocean spray into the flames. Chocolate bars are broken into pieces as marshmallows are jammed onto sticks. Flasks and bottles help keep the chill in the air from seeping into your bones. Short stories turn into longer tales, and laughter carries into the night. It’s simply the best time of year, according to Griffin Bufkin and Harrison Sapp, the kingpins of pork on St. Simons Island.

The Southern Soul duo are inviting those near and far to meet them by the fire to enjoy some food and drinks with their friends during Firebox’s 2nd Annual BBQ on the Bluff Invitational.

“We hope to throw a big party out there in the park,” Bufkin says of the barbecue bash set for October 4 to 6 at Gascoigne Bluff on St. Simons Island.

Previously part of the St. Simons Food and Spirits Festival, the once-BBQ Pro-Am paired golf pros with pitmasters and was always a sold-out event. “So last year, we rebranded it Firebox, but it was still a part of the festival. Part of it was that we couldn’t commit a lot of the golfers. So we turned it into a different event, and we invited twice as many people because it was a bigger spot. I mean, it’s just turned into something bigger,” Bufkin says.

With the food and spirits festival on a break this year, it opened up the chance for Bufkin and Sapp to blow out the whole weekend as a festival that celebrates the good, the tasty, and the fun. “We had been doing just one night, usually Thursday night; and this year, we get Friday and Saturday to have fun. It’s going to make a difference because people can plan around the weekend. It’s hard to do a Thursday night when you have to work the next day, and a lot of these barbecue guys had restaurants to run the next day. This year, they have no excuse,” Bufkin says with a sly smile. 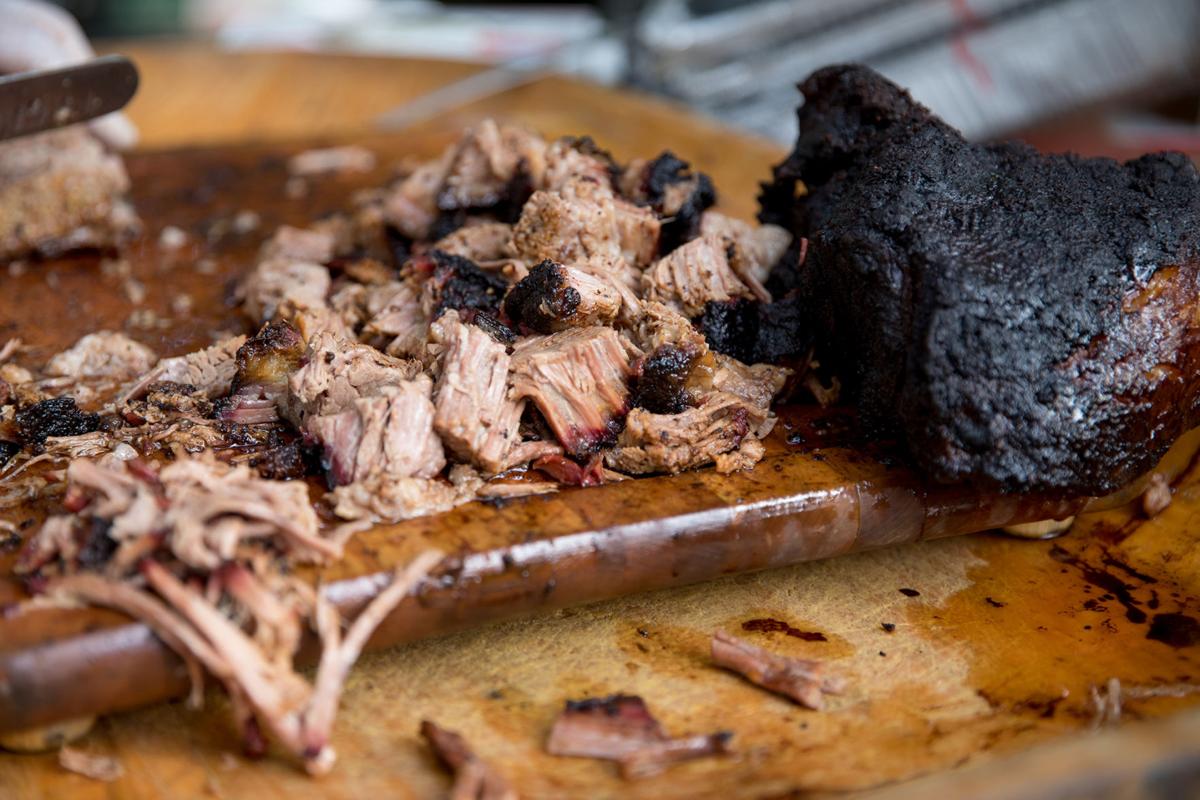 And quite a lineup of culinary talent have they brought together, with dozens calling up to take part in the weekend. Amy and Mike Mills of 17th Street Barbecue in Illinois are headed down South — “Mike is known as The Legend. He’s the mentor guy,” Bufkin says. Peg Leg Porker’s Carey Bringle, Bryan Furman of B’s Crackling BBQ, and Billy Derny of Hometown Bar-B-Que in New York City are all planning to fire up their pits at Gascoigne. And then you have Tuffy Stone, a classically trained French chef whose pitmaster skills have made it to television. “He wins everything,” Sapp says. “It’s crazy the talent that is coming.”

Kicking things off will be Southern Soul BBQ’s Pitmaster Dinner on Thursday night. The guys from Southern Soul have invited Chef Benjamin Dennis out of Charleston to join them in the kitchen to create a feast of flavors for attendees.

But what’s a good meal without something to wash it down? Don’t worry, though, because Sarah Young of Wild Heaven Beer out of Avondale Estates will be here for the fifth year to pour the night away. David Szlam will be there with bottles of his Virgil Kaine Lowcountry Whiskey.

Friday night will be sizzling as attendees guzzle down as many local McIntosh fire-roasted oysters as they can stand during the Firebox Oyster Cracker. Kettles provided by Sea Island Forge will be scattered around for the roast as Piedmont Brewing serves a special oyster stout brewed just for the occasion.

New this year, Cheryl and Griff Day will be serving up some tasty goodies on Saturday morning for the Back in The Day on The Bluff: Coffee, Biscuits & Bloodys. From 10 a.m. to noon, folks can gather for sweet treats and some tasty morning cocktails as the Bluff prepares for the big event later on. “You get to come out there on a Saturday, the sun will be up, and you get to have coffee and donuts with all the pitmasters,” Bufkin says. 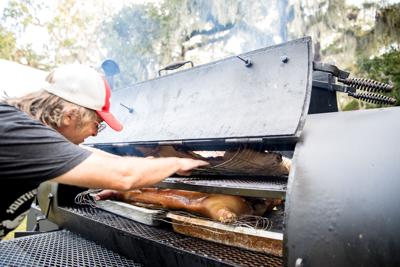 “We will also have some bloody marys out there. It will be really casual — have a bite to eat and ask the pitmatster whatever and start your day,” he says.

That will segue into the pit class, where the smoke kings share their secrets from 1 to 5 p.m. “Guys and girls get to spend the day watching all the barbecue guys cook. And we will have a little table set up,” Bufkin says as Sapp adds, “Last year, they smoked cigars and drank bourbon, and just talked for two hours.”

And while the Pro-Am is a thing of the past, that doesn’t mean you won’t spot a golf pro or two out and about while the artisans of smoked meats are working their rigs. After all, Davis Love III knows his way around the smokehouse almost as well as he does around the golf course since he became part owner of Southern Soul with Bufkin and Sapp. “People get to hang out with Davis Love. They say, ‘Davis is here? That’s a good deal,’” Bufkin says with a laugh.

Then it’s time for the big to-do: the Firebox BBQ on the Bluff. From 7 to 10 p.m., people can pile on their plates mountains of spare ribs, pork butts, beef briskets — and that’s just the hog options. With seafood, sides, and spirits to sip, the night promises to leave everyone “fat and happy,” Bufkin says. 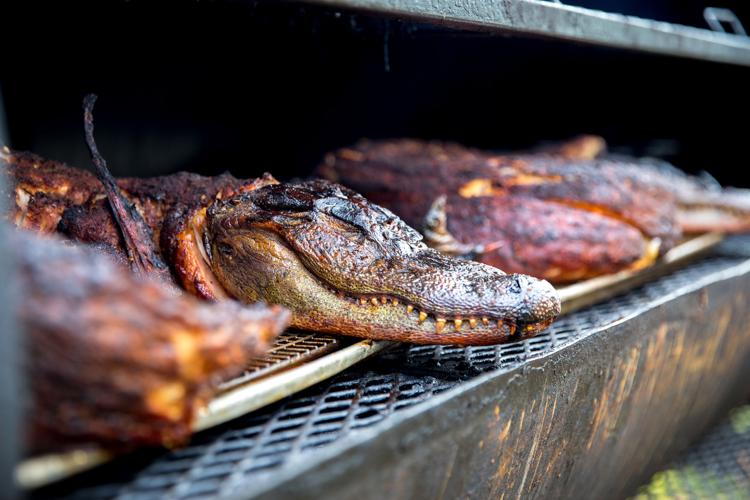 It’s not just all fun and games, either. Money raised from ticket sales will go straight back into the community via Firebox Initiative, the nonprofit Bufkin and Sapp set up to assist those in the hospitality industry who need an extra hand. “We’ve had so much to deal with, and it seems like the whole island has had so much. We had the ice storm and two hurricanes. We had a fire, for Chrissake,” Sapp says. “You look around and you see the people affected. If a business closes, people are screwed and can’t pay their bills. Everybody in the service industry is weekto- week it seems like, and that’s really what we are hoping to help out with.”

“When we had the fire [in 2010], a guy rode up on his bicycle and wrote us a check right there, on his bike. I’m not even going to tell you the amount,” Bufkin says with Sapp adding, “It paid everybody’s salary for two months while we were closed … He was the first person to get paid back, and he didn’t even want it back. But that’s really why we are doing this. And we hate to say it like that, but we are really just trying to pay back what we got. There are a lot of people less fortunate and need it.” 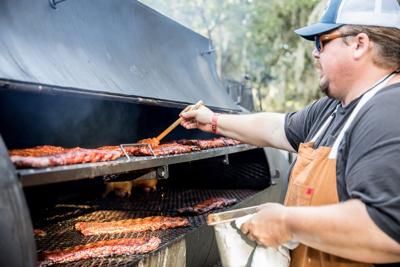 Modeled after The Giving Kitchen in Atlanta, the St. Simons nonprofit will be the place where donated funds are collected and distributed as grants based on an application process. Service industry employees in the Golden Isles dealing with financial difficulties because of an illness, accident, or natural disaster, can apply. Funds can also be given to restaurant employees who need help paying for funeral arrangements for immediate family members.

And then there is the plan to help spur others into culinary careers. “We really want to do a couple of scholarships to local schools for the service industry. It would be really cool if we could sponsor three or four kids to go through the culinary program,” Sapp says. Bufkin pipes in, saying, “We want to see these guys open up their own restaurants and become celebrated chefs.”

So while the pork is smoking, the whiskey is flowing, and the folks are chatting during Firebox this year, the long-term effects could be felt in years to come. “We love to throw parties, and these guys live paycheck-to-paycheck. I mean we still do, who am I kidding. But we know what it’s like. If there is anything we can throw our hat in the ring to help, we will do it,” Bufkin says.

The weekend will also be a chance to show off the Golden Isles to the other chefs, the men say. 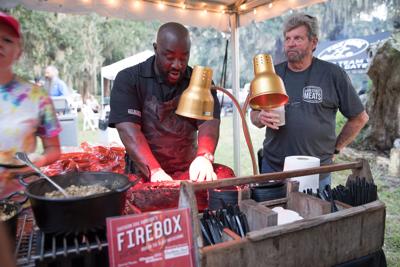 “One of my favorite things to do is — and what I end up doing all weekend is — showing these guys a good time, you know,” Bufkin says. “You just look up at one point, and you are in the middle of the weekend, and you are just like ‘Woah.’ We are doing karaoke. We are eating steak. We take them fishing. A couple of them will go play golf. We try to fill up their weekend. We want to be ambassadors of St. Simons.”

“The people on the island have gotten to know them,” Sapp adds. “And October is perfect on the island. I mean, it really is.”