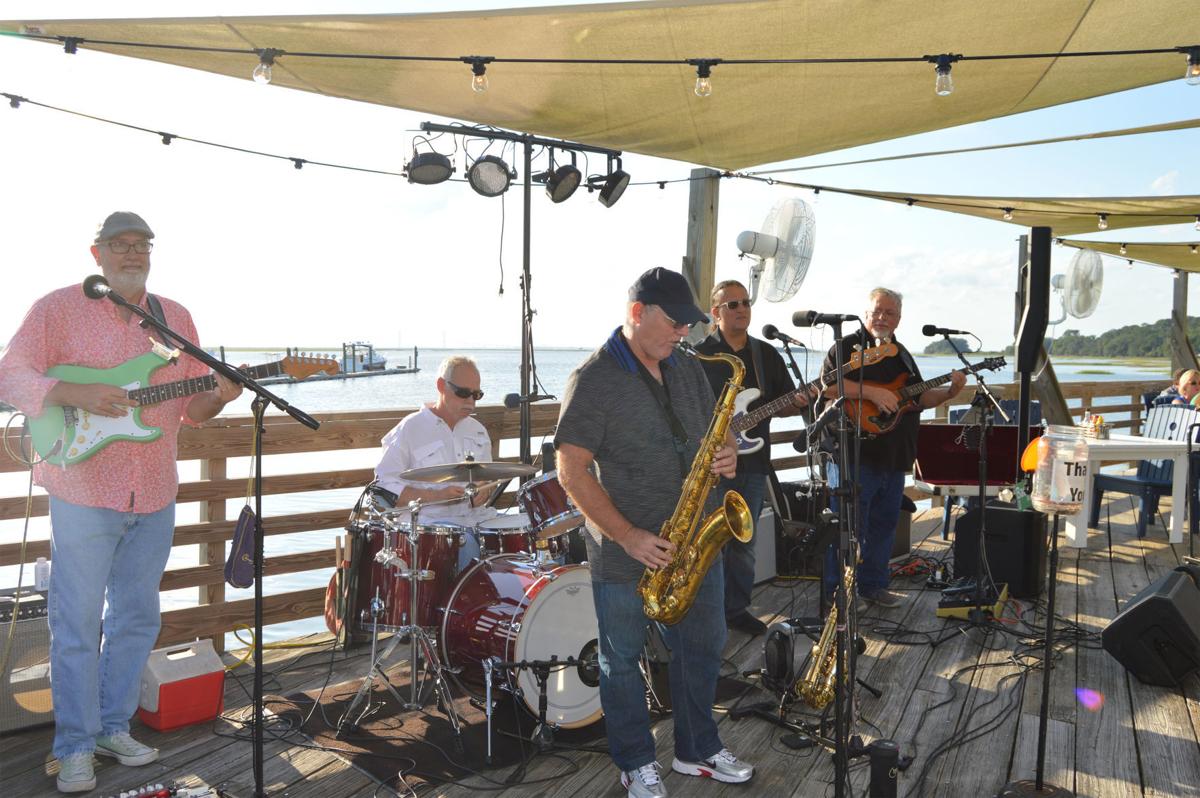 Linda Haas Local Color 06/21/201906/21/2019CoastalGeorgia, Georgia, HolidayOnStSimonsIsland, StSimonsIsland, VacationOnStSimonsIsland, VacationSoup
The Golden Isles is a hotbed of live, local (and sometimes not-so-local) music. Pass by nearly any establishment on certain nights of the week, especially weekends, and the sound of beach music, rock ‘n’ roll, oldies, Motown and country music will delight your ears and set your toes to tappin’.

Tipsy McSway’s — The heart of music in downtown

The epicenter of music in downtown Brunswick is Tipsy McSway’s, as it has been since the popular restaurant, bar and SoGlo hangout opened in March 2012. Owner Susan Bates doesn’t shy away from welcoming entertainment that’s a little different. A case in point is this. During a recent weekend, Tipsy’s welcomed Free Spirit Orchestra, which consists of twin sisters on violin, and a drummer. They hail from Khazakstan. The following night In For a Penny, an Irish-Celtic punk band from Savannah, entertained the crowd. Of course, Tipsy’s also welcomes the area’s favorite bands to entertain guests, but has also invited Klezmer music, rap, soul and R&B groups to grace the Dixie Music Center stage.

It’s a competitive community for bands and other musical acts, Bates said, based purely on the number of bands that are vying to be featured at venues.

“They’re looking for venues,” she said. “The amount of musicians is much greater than the number of venues – it’s disproportionate.”

That, combined with only having 52 weekends (or 104 dates) to book acts, makes for a crowded field. Most venues have set entertainment the other evenings of the week, and don’t usually book someone who doesn’t appear there regularly. Examples include Joey Thigpen at Demere Grill on Wednesdays, and Crawford Perkins at Tipsy’s on Thursday.

“There are 104 opportunities to have live music each year,” Bates said. “There are a lot more bands than 104, just in our region.”

Sometimes bands are traveling the Southeast and make unscheduled stops along the way. That’s how Tipsy’s has been able to welcome Grammy winner Trae Pierce and Jason Rikert of Arrested Development.

Still, she doesn’t have to look far to find professionals.

“The level of musicianship is incredible,” she said. “Because of that, I can be a little picky.”

Bates takes risks by sometimes booking musical acts with which local audiences aren’t familiar, but because of the reputation her establishment has earned, people will give new acts a chance.

“Even if people haven’t heard of a band, they know they’re going to have a great time and hear a wide variety of music,” she said.

Mullet Bay, on Ocean Boulevard, on St. Simons Island, is one of those places that it’s easy to wander in to, simply because you walked by. The restaurant has live music every week Thursdays through Saturdays. Monique Cothern is the Thursday night artist-in-residence, and other local acts rotate through the remainder of the weekend.

“It’s important in certain venues,” he said. “We are so dedicated to food and service, music is an added plus.”

Eason said the venue is a favorite local hangout, but gets its share of visitors as well.

“We like to have bands that have a following, that people like to listen to,” Eason said. “We’re fortunate; it’s a partner relationship.”

Gnat’s Landing — Kick back, relax and enjoy the music

Samelia “Sam” King, who recently took over the entertainment booking duties at Gnat’s Landing, says having live music brings a relaxed atmosphere to Redfern Village. Gnat’s has a track record of booking mostly local acts, although some bands touring the Southeast pass through from time to time and stop for a night. Word of mouth also helps bring bands to the Gnat’s stage.

King says the bands booked at the well-known island spot tend to play rock ‘n’ roll, but there is plenty of variety as well.

“Rock covers, some pop, some R&B remix,” she said.

Finding performers no longer requires bands submitting tapes, or the even more labor-intensive work of having a bar representative roam from venue to venue on a “listening tour.” These days, bands typically connect with venues through social media, and send a link to their YouTube channels. That makes auditions easier for everyone involved.

Gnat’s Landing has an advantage over some area venues as it has two spots in which entertainers can comfortably perform. In inclement weather, most acts perform indoors, but during the warm weather months, and on evenings with no rain, the “Gnatio” is the setting for entertainment in Redfern Village. It’s easy for people to gather outdoors, and accessible to passersby.

Still, King knows her patrons like to hear their favorite bands.

“We know which bands have groups of followers,” she said.