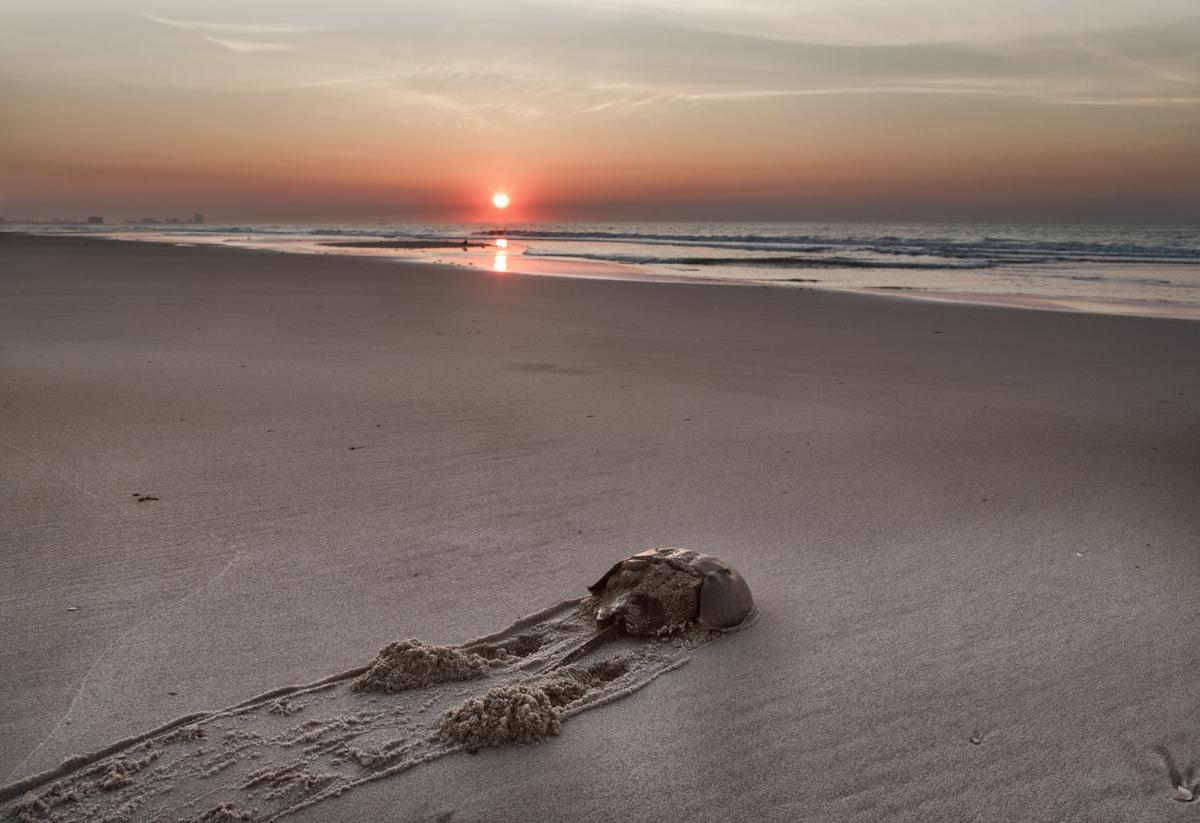 Pushed along by the waves, she slowly inches her way out of the ocean. She is driven by her instinct to this beach in the spring. She is not alone. She is followed by a horde of suiters. The moon is full. The tide is high. All of her beaux are blinded by her beauty. Tonight, there will be “love” at the edge of two worlds, the ocean and the land.

For the horseshoe crab, beauty is in the eyes of the beholder.

Horseshoe crabs are ancient. They were here before the dinosaurs. They survived the extinction of the dinosaurs and are found today in all the oceans. Horseshoe crabs look like tiny tanks slowly shuffling along the ocean floor. They have a hard shell called a “carapace” that is shaped kind-of like a horseshoe. Behind the carapace is a spiny tail, which they use to push themselves over when upside down. The females are the size of dinner plates. The males are the size of saucers.

These bizarre creatures are not crabs at all. They are related to spiders. But before you all go “ewww” on me — the link is so far back in time that all you spiders-fearing-folks don’t have to worry; these beasts are harmless. These “crabs” have eight pinchers that are used for clinging to the ocean floor. They do not pinch.

When I wrote, “beauty is in the eyes of the beholder,” I meant “eyes.” Horseshoe crabs have compound eyes. There are the pair of eyes that are on the top of the carapace, but studies show these curious creatures have ten eyes positioned around the shell to help it find its way around its watery world.

They are made for the oceans. Their mouths are in the middle of their eight legs, so as they crawl along, they can filter food into those mouthes. They have gills, but they can stay on land if they can keep their gills wet. If they get stranded on the beach, they bury themselves and keep the gills wet.

One of the many fascinating features of these creatures is that they are genuinely blue-blooded. A protein called hemocyanin contains copper which creates a blue hue. This hemocyanin is also important for medical research and labs began collecting the blood, and retuning the crabs to the ocean. How those donors fared remains unknown.

To add to that uncertainty, in 2000 the eel fishing industry discovered horseshoe crabs were great bait. The wholesale harvest of these creatures caused its sudden decline. These crabs that survived the extinction of the dinosaurs were disappearing. The tide turned in 2008 however, when New Jersey became the first state to ban the harvest of horseshoe crabs. Other states followed suit, setting limits on harvesting practices.

Why should we care? Horseshoe crabs have an intriguing nature connection. They must come to the beaches to mate and reproduce. The high tides help push the female crabs onto the beaches. She lays her green eggs in a shallow hole, her mate by her side. Eggs laid (and they lay lots of eggs), she inches her way back to the ocean.

Those millions of protein-rich eggs fuel the globe-trotting shorebirds, like semipalmated sandpiper and red knots, on their long journeys to the arctic. Without the horseshoe crab, these shorebirds would not have the energy to make a fantastic journey.

Everything works together. Look for this nature connection at high tides in April or May.

The Isles are alive with music