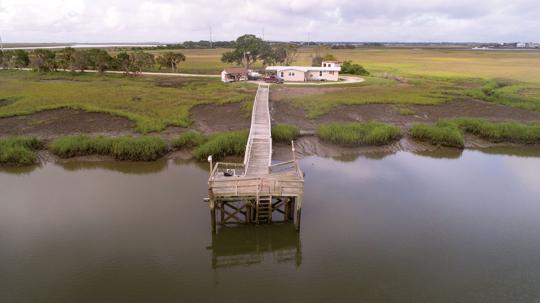 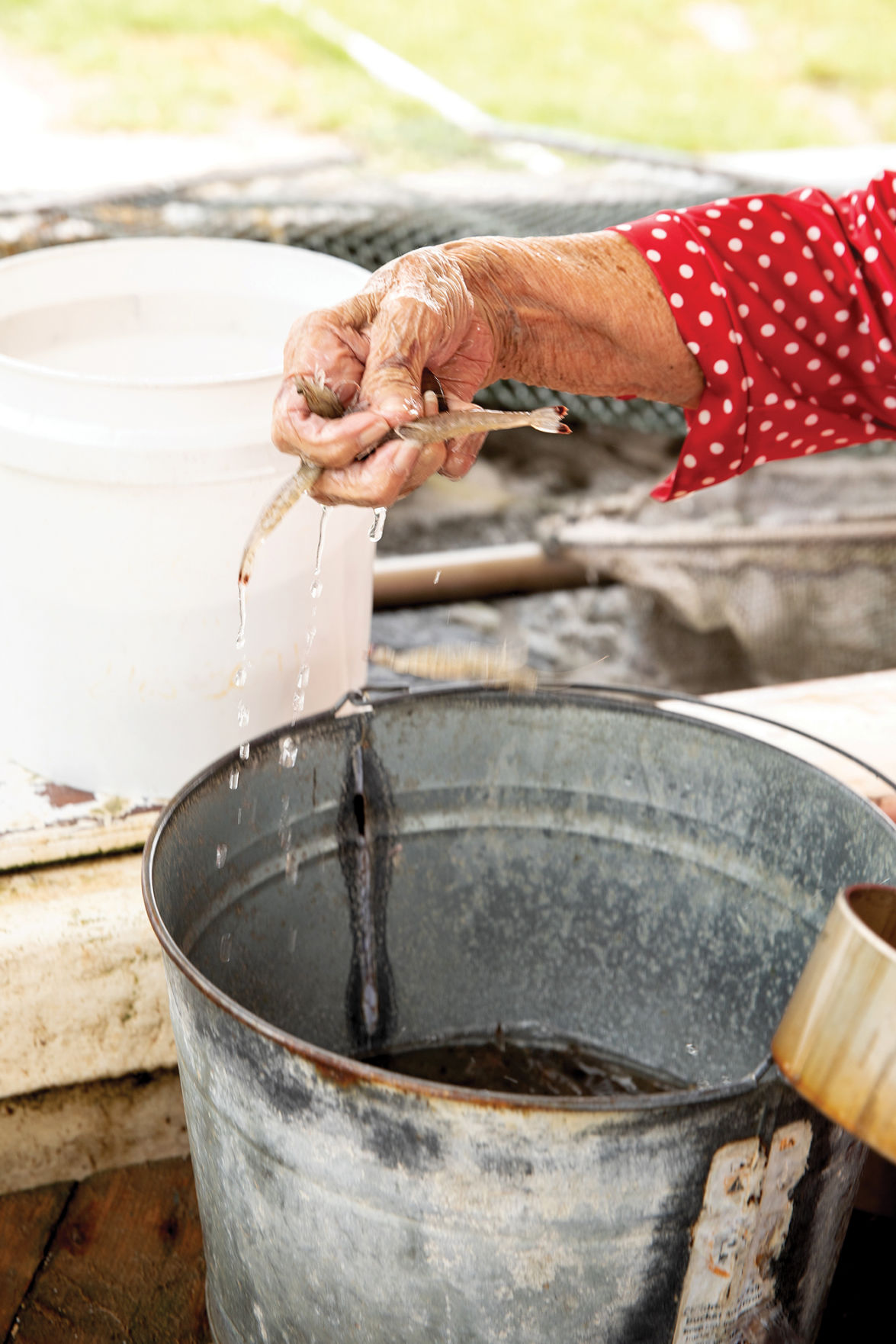 Bill Bennett and Leslie Jacobs begin their daily grind at dawn on a Saturday in May, cutting a gentle wake through the primordial wetlands that most of us drive over or around. Exposed to the elements, the two men work all through a shimmering sunrise that casts sparkles on the inland waters and frames the marsh in those distinctive golden-green hues of late spring.

They stick to their task all through the morning, toiling over the unwieldy net that slogs behind Bill’s aging 24-foot-long open boat. Nearby, long-legged waterfowl stalk the marsh’s edge, while migratory birds cruise overhead in formation. Hours later, framed against the solitude of an island off the beaten path of the F.J. Torras Causeway, Bill repeats his vow to give it all up someday and get himself a real job.

But with the day’s yield secured and delivered, he instead hands Leslie a pair of Jacksons — 40 bucks pay for his share of the catch.

“If you want to make a good living, we recommend you don’t go shrimping,” says Bill, kicking back on the front porch of this little island’s only home. “You’ll go broke,” Leslie adds, letting only a sliver of sarcasm show in his wry smile.

Shrimpers can put farmers to shame when it comes to the time-honored art of poor-mouthing one’s prospects for prosperity. But Bill and Leslie are correct on this point: They are not in the shrimping business for the money. 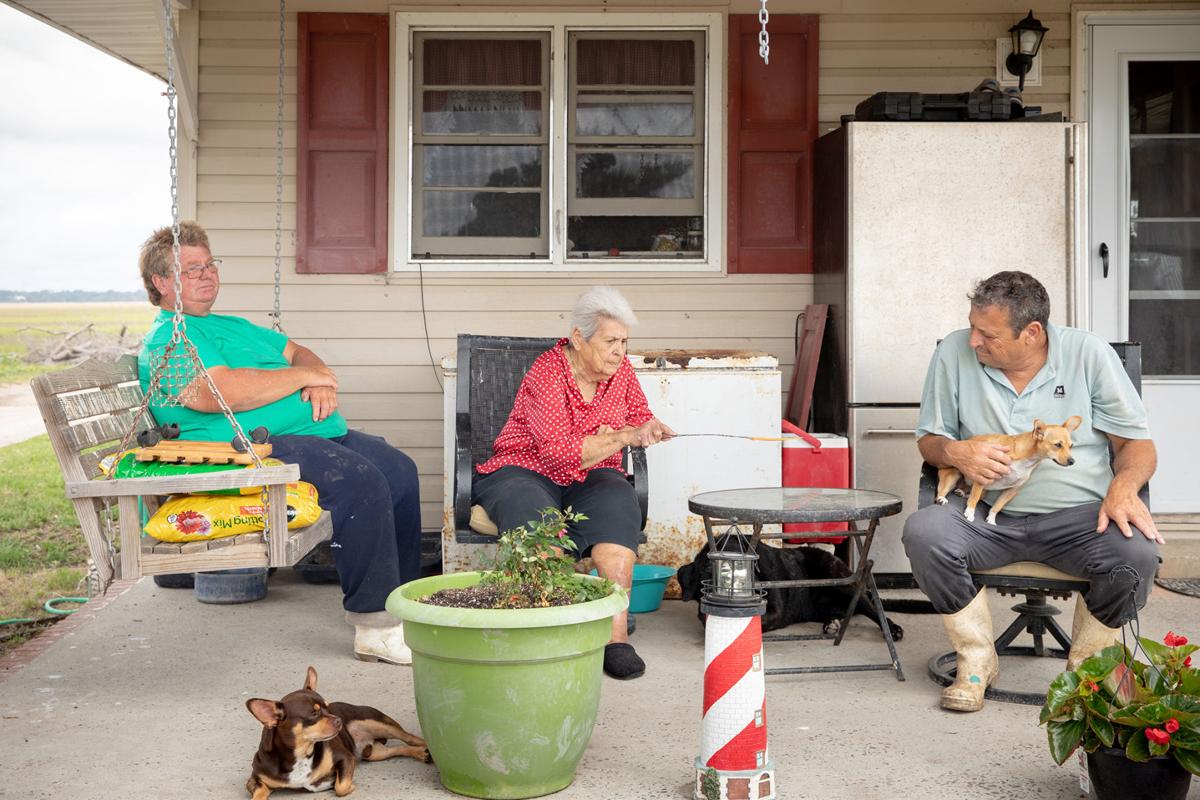 Neither is Bill’s sister, Sandy Marsh, who seems to have a pack of happy dogs following her every step; or Shirley Bennett, the 84-year-old matriarch of this family outpost on a speck of dry land that rises just barely out of the expansive surrounding marsh. In fact, nobody here is getting rich selling shrimp for bait — $16 a quart for live ones, $8 a quart for frozen dead ones.

But Shirley extends a sympathetic smile to the poor fool who asked why she lives way out here, getting by on the whims of bait shrimp and passing anglers.

“I love it,” Shirley says, contentment glowing on her gentle, salt-weathered face. “I just love everything about it — the river, the peace and quiet. I am just happy right where I am.” 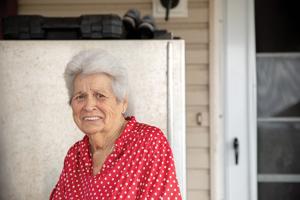 Shirley is mother to Bill and Sandy and aunt to Leslie. The operation is still known simply as George’s Bait, even though its namesake, George Bennett, passed on 34 years ago. They have been selling bait to avid anglers along the causeway since 1953.

Their proximity to the traffic gateway onto St. Simons has come with a cost, though. The family business once sat on stilts above the marsh on the other side of the causeway. But they had to transfer their operation, house and all, to its current location after the state transportation folks four-laned the causeway back in the 1970s. Then, seven years ago, the DOT installed the concrete divider between island and mainland traffic to prevent head-on collisions. By doing so, access to the bait stop was blocked for anyone traveling onto St. Simons. Still, the loyal customers keep coming to George’s for their bait shrimp and live crabs, despite the hopscotch of logistics presented by the new divider.

And new customers seem to arrive just about every day. Folks like Eric Rentz, a first-timer who is unaware that plastic transactions do not take place out here in the marsh. Cash only.

Frustrated, Eric stands at the open door of his pickup. The boat on the trailer behind the truck is all set for a day on the water. His teenage sons, Seth and Garrison, sit anxiously inside the cab. 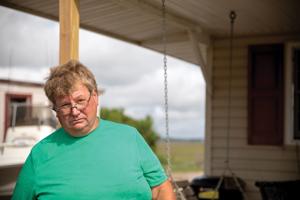 “No worries,” Bill says.   “When you get done fishing today, just bring some money back with you,” he tells Eric.

“He needs a quart of live, Mamma,” Sandy calls to Shirley, who stands underneath the shed that covers their live bait well. Shirley makes like she does not hear at first, but the feisty octogenarian is already scooping up a netfull of hopping and flipping shrimp when Sandy repeats herself. “She can’t hear nothing no more,” Sandy says, chuckling and pulling on a Marlboro Menthol.

“This is my first time coming here, but everybody recommended that I stop here for my shrimp. They said this is the best place in town for bait,” Eric says, eager to hook some sea trout or redfish on those live shrimp.

True enough, few people locally know the business of shrimp better than the Bennetts or those Jacobs folks. 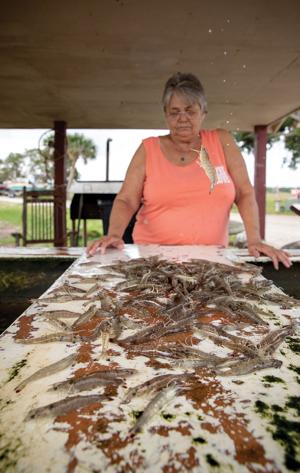 Shirley’s nephew Johnny Ray Bennett plies our offshore waters in his 84-foot trawler, The Flying Cloud, harvesting the Golden Isles’ delectable bounty of shrimp for City Market in Brunswick. His brother, Bobby Ray Bennett, works out of the City Market docks too, carrying on the shrimping tradition handed down by their daddy and his daddy before that.

Leslie Jacobs first went out on his father Fred’s shrimp trawler when he was 7 years old. These days Leslie is captain of the Liberty Belle, the only commercial shrimping boat still docked on Jekyll Island. Leslie markets his shrimp to individuals and local restaurants on Jekyll. He went out bait shrimping with Bill on this sunny Saturday in May mainly as a favor to his cousin.

“I started out helping Daddy when I was just a boy, and it just got handed down the line,” explains Leslie, who docks at The Wharf on Jekyll Island. “It’s hard to get it out of your blood.” 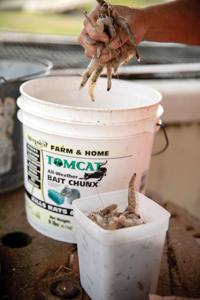 Bill and Sandy grew up on the marsh beside the causeway in the house that George built. Sticklers for specifics will call their island a hammock or a little peninsula, connected as it is to westbound causeway traffic by about 300 yards of dirt path on a raised embankment. The island itself is just big enough for the house, the circular dirt path around it, the bait well, and six dogs: Trixie, Little River, Minner, Bruiser, Buddy, and Georgia Shrimp.

And it is here that this line of the Bennett shrimping family carved its niche in the bait business. Their sister, Debbie Edwards, also earns her living by trawling the inland waters for bait shrimp. She provided shrimp for the family business from 1988 to 2016, but now shrimps mostly for the competition. “She caught all the shrimp for Mamma for 28 years,” Sandy says of her sister. “She still brings some by now and then, if Mamma’s runnin’ low.”

In his younger years, Bill captained an open-water shrimp trawler and also found work as a striker on other captains’ big boats. But a bad hip made the smaller-scale bait shrimping on the inland waters more manageable. So he went back into the family side of the business, picking up where his daddy left off. In fact, that 24-foot Scandia open fisherman he plies the inland waters with once belonged to George. 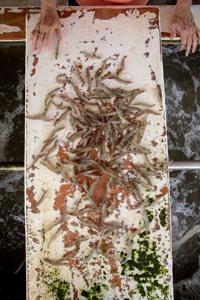 “My dad first put me on a boat when I was about 5 years old, and I’ve been shrimping ever since,” Bill says, echoing his cousin’s words. “Sometimes I wish I could do something else, make more money. But it’s pretty much in my blood.”

Their little patch of high ground is but a curiosity to most of the hordes who buzz past it on the busy causeway. Few pay attention to the modest wooden sign out front between the two big bridges that tells passing motorists that George’s Bait has live shrimp and crabs.

But the family’s customer base does not need a sign to find their way here. Brunswick’s Michael Coleman inherited his loyalty to George’s Bait from his grandfather, David Nelson. “I’ve been coming here since I was a boy,” Michael says, puffing on a thin cigar. “Shop local, get some good bait.”

Today, Michael just needed some frozen shrimp, which you can get just about anywhere that sells fishing tackle. Sandy notes that the frozen shrimp have been selling nicely of late. “We can’t keep the dead ones right now,” she says. “It’s whiting time.” 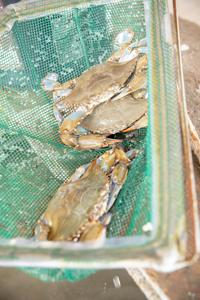 Little has changed since Michael’s granddaddy and others of that generation first started coming to George’s Bait. Well, not much that the customers would notice. But that boat the family never named used to pull up to the long dock that connects their island to the Little River. After the storm called Irma last year and Hurricane Matthew the year before that, there is not much dock left.

Nowadays, Bill puts in at the boat ramp beneath the Sidney Lanier Bridge. He drags for shrimp out on Joe’s Creek off the Frederica River on the marshland side of St. Simons, then returns to the boat ramp.

And that is why, on this day, Bill’s boat sits atop its trailer, attached to his truck, parked in that dirt path between the house and the bait well. Scooping frisky shrimp out of the boat’s large holding tank and emptying them in a 5-gallon bucket that Leslie holds up from the ground, Bill grumbles again about one day giving up on this whole shrimping thing. But it has been a pretty good day, as evidenced by how many bucketfuls it took to make the transfer. It starts putting him in a grateful mood.

“I do appreciate it,” Bill says, scooping the last few shrimp from the boat’s holding tank. “You never know what God’s going to bless you with when you throw that net over. You just wish it well; it’s a blessing whatever you catch. And it’s a blessing that I have the knowledge to do this.” 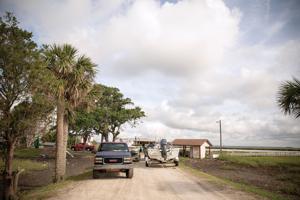 Raymond Topp is a regular customer who holds a deep appreciation for the knowledge the Bennetts possess. A lot of folks know the St. Simons Islander as Dr. Topp, an orthopedic surgeon with Southern Sports Medicine in Brunswick. He will drive all the way to the mainland and back, if that is what it takes to buy his shrimp here.

“I always come here,” says Dr. Topp, heading out for trout and redfish with brother Jeff, who is down from Philadelphia. “This is where I get all my shrimp. And it is worth the extra drive just to see Miss Shirley.” Says Shirley, “I’ll be here till the good Lord take me.”

So the anglers keep turning down that dirt road off the causeway, coming to George’s Bait to get their shrimp. And George’s son will keep going back for more, heading out into that pristine natural wetland that we all go over and around. “It’s my office out here on the water,” Bill says. “You’re your own boss out here; you do what you want. And it’s always exciting to check on your catch, to see how full the net is. It’s fun. It’s a job, but it’s fun.”