We had a couple of friends visiting from the UK in early April, and Linda and I decided to go on the St Simons Island Colonial Trolley tour with them.  We all agreed that it was well worth it.

Information can be found here…… https://www.colonialtrolley.com/ and their phone number is 912-268-0363. The trolley runs 7 days/week, rain or shine and the tour is about 1 ½ hours long.  You can prepay for your tickets on their website to be sure you have a seat, or just show up at the tour time.  It’s the orange trolley and you pick it up right in front of the Village Pier.  The tour times are 10 am and noon every day except Sunday.  On Sundays there is only the 10 am tour.

Captain Rod gave a great tour, really knows the history of the island and told it all in a very interesting way.  Some of the highlights were his stories about Neptune Small, James Gould, and the Battle of the Bloody Marsh, and we stopped at the relevant places, Neptune Park, Christ Church, the Bloody Marsh monument, and Fort Frederica.  There were other stops along the way as he pointed out many additional sites on the island and even recommended some restaurants. 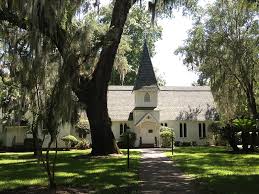 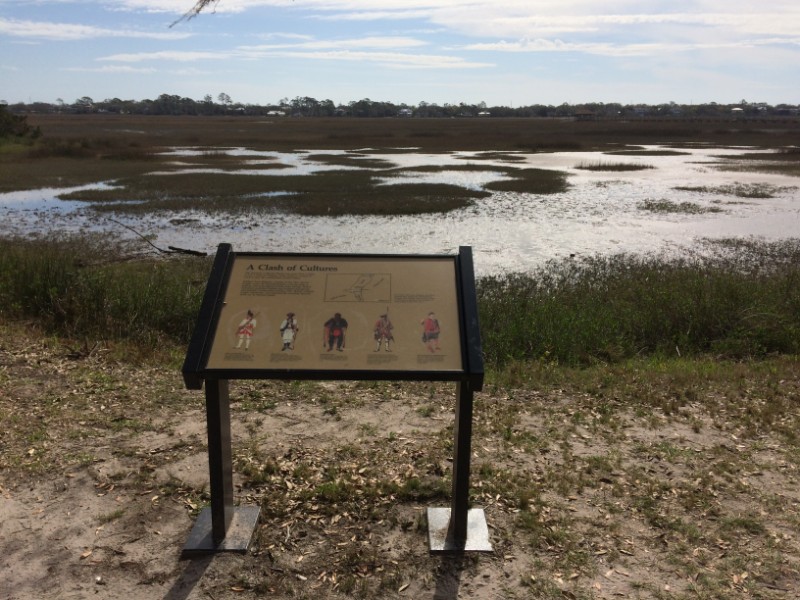 We didn’t get off the trolley at the places we stopped and I could understand why, as the tour would have been much longer if we did.  However, it would be easy to return to any of your places of interest later in your vacation or even later that day to explore further.

Through my years staying on St Simons Island I’ve heard bits and pieces about its amazing history.  However, until my tour with Captain Rod I didn’t have a full understanding of it all.  I’m so glad we finally did the tour and would definitely recommend it to any island visitors.

Travel Tip created by Art in association with Vacation Soup

A blanketing pergola of live oak limbs draped in Spanish moss. Fresh-caught shrimp seasoned and served in a bowl of buttery grits. The hissing of oyster juice as it hits a hot bed of coals. An evening breeze that brings relief from the heat of a warm summer’s afternoon. And that smell the breeze carries. The one that the non-locals always mention upon arrival, often with aversion. The smell of the marsh – the heart of our coastal food web. These are a few of the things that make life on our coast a treasure to me.

With only a slight increase in elevation on the Georgia coast, you can peer out over expanses of salt marsh. Perhaps it’s from the second floor of a restaurant with a vista window or an outside deck. Or maybe you take in this scene going over a causeway on your daily commute or every once in a while when you come for vacation. And hopefully you’ve noticed that image change as the year progresses: the grasses waking in early spring as a vibrant and lively green, fading slightly by late summer before nature’s alchemy presents us with gilded meadows as fall becomes winter. The Golden Isles takes after its namesake with a splendor of its own.

After one- or two-year life span, that golden marsh grass will die off, drop in place, become washed over, and carried around in the estuary by currents, slowly breaking down all the while. This decomposition is the primary driver of our coastal food web. To highlight a few of these connections, consider this snapshot of a given day in a tidal creek on the Georgia coast. 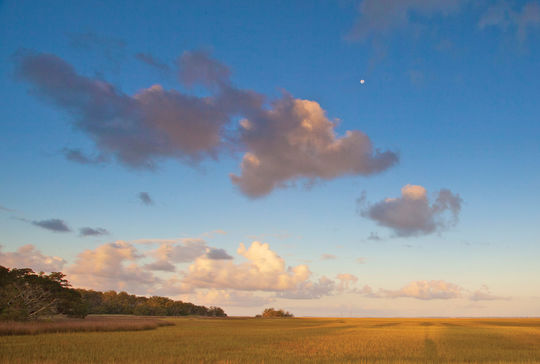 Just visible over the tops of marsh grasses, the white head and yellow bill of a great egret can be seen as he searches for the next shrimp to lunge for. Finding one, he makes a move, but the shrimp escapes predation, darting under the nearest oyster bed. The oysters, busy filtering algae from up to 15 gallons of water each per day, unknowingly provides refuge. A juvenile fish hides out around the reef, looking for its own shrimp dinner. Swimming away, fat and happy, the fish sees only a flash of yellow. The patient egret gets the shrimp after all, and then some. 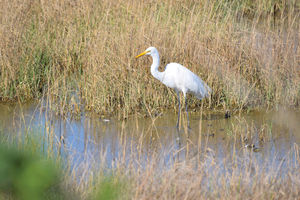 With the tide rushing in, the egret takes flight to roost on the fringes of the marsh. Below, two bottlenose dolphins chase a school of fish up the creek. Several raccoons skedaddle toward the hill, away from rising waters, leaving behind bits of shell from their feast of fiddler crabs. A few of the fiddler crabs escaped though, receding into their underground burrows — those same burrows the marsh grass depends on for aeration of its roots. Just outside a burrow, in the sediment, lies some of last year’s marsh grass, decomposing into food for zooplankton, a favorite meal of the shrimp. Our sweet, Georgia shrimp.

And in appreciating the beauty of our coast, we must certainly acknowledge the rivers. Draining to the coast, Georgia’s inland waters bring the vital nutrients needed to sustain our marshes. The Altamaha River, also known as Georgia’s Little Amazon, is anything but little. Converging in Lumber City, the waters of the Oconee River that start in north.

Georgia and the Ocmulgee River from middle Georgia form the Altamaha. These waters then travel 137 miles, gaining the Ohoopee River along the way, and pour into the Altamaha Sound at a rate of 100,000 gallons of per second. Just south of Sapelo Island and north of St. Simons, Little St. Simons, and Sea islands, the second largest river basin on the east coast reaches the sea. This river drains nearly one-third of Georgia’s real estate.

A resource so grand and influential must be paralleled with an equal amount of responsible use and great stewardship. Luckily, we have many champions of the river who do this for a living, including the Altamaha Riverkeeper, the Georgia Department of Natural Resources, and the Nature Conservancy. In October 2017, the Georgia Department of Natural Resources and the Nature Conservancy announced that together with the Conservation Fund they had secured the final piece to the puzzle in their decades-long quest to protect the lands bordering the Altamaha, known as the Altamaha River Corridor. With the purchase of a 19,500-acre tract along the border of Wayne and Glynn counties, all lands touching the river from the ocean to Jesup — more than 186,000 acres — are now under conservation and protected from development. “From the mountain creeks in the headwaters of the Altamaha watershed to the tidal creeks and rivers, the health of our coast is dependent upon them and the land and water use practices surrounding them,” says Christi Lambert of the Nature Conservancy. Lambert has been a steward of the river in a professional capacity for more than 25 years and integral in the Nature Conservancy’s accomplishments in protecting the watershed. And as if the ecological importance of the Altamaha isn’t enough to celebrate, her waters, steady brushing around the tupelo trees and cypress knees, roll through a landscape that rivals the barrier islands in raw beauty. 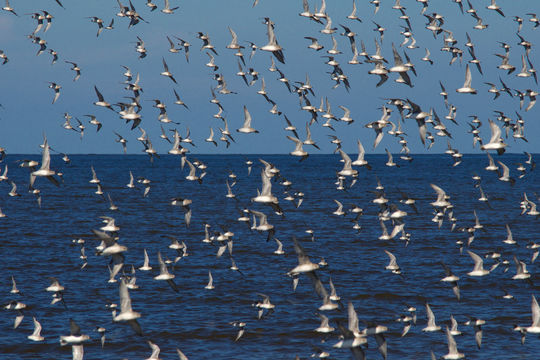 Just days after the Altamaha River Corridor became fully protected, the Western Hemisphere Shorebird Reserve Network gave Georgia’s barrier islands the official title of Landscape of Hemispheric Importance. To be nominated, an area must be known to host at least one-third of the population of a given shorebird species. “This is a very high bar, but one that we were able to document for red knot, a federally threatened species (23,400 were documented in fall 2017 in the Altamaha Delta) and the Great Lakes nesting Piping Plover,” says Georgia Department  of Natural Resources wildlife biologist and founder of the Georgia Shorebird Alliance Tim Keyes.

There are many different sizes, shapes, and behaviors among shorebirds species, and in general they are known for their long distance migrations. The red knot, for example, makes an 18,000- mile round trip migration every year from the southern tip of South America to breed in the Arctic. When they stopover on our coast, they are critically dependent on its resources — particularly horseshoe crab eggs — for fueling them on the next leg of their trip. In fact, they time their spring stopovers to occur during horseshoe crab spawning events along the beaches. Yet another elegant example of the important connections between land, sea, and sky on our coast. 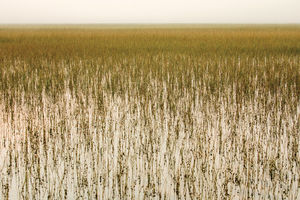 Though the observed numbers of red knots and piping plovers warranted this designation, the Georgia coast supports 35 species of shorebirds at some point in their life cycle. The mixture of sandbars, mudflats, and salt grasses on our coast provides optimal year-round shorebird habitat. Keyes says the nomination not only sets a higher priority on shorebird conservation moving forward, but it is also an “award that recognizes the amazing conservation work that has protected so much of the Georgia coast in the past.” Megan Desrosiers, president of the nonprofit coastal advocacy group One Hundred Miles that worked with the shorebird alliance for the nomination, says, “The announcement confirms to the rest of the world what we in Georgia already know: Our 100 miles are a wonder of the world — worthy of our pride and deserving of our protection.” With increased human inhabitance along coastlines posing a threat to shorebirds globally, it’s important for us to be mindful of these creatures who need our coast as much as we do. So, when we see an area on the beach marked off by the Department of Natural Resources for bird nesting, by giving them space from us and our dogs we are playing an important role in achieving a harmonious cohabitation with these animals. 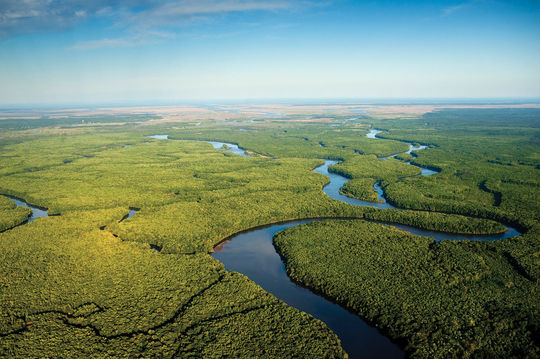 Recognition of the beauty of these islands and subsequent action taken to preserve it has and continues to benefit those in our communities, whether we were born here, moved here, spend our vacations here, or only migrate through. That mentality and dedication are what will allow our grandchildren to have the same experiences with this place and inspire them to carry the legacy of Georgia’s coast forward.

Once upon a time (the early 1980s to be exact), a skilled craftsman named Keith Jennings set out on a mission to leave his mark on St. Simons Island. With woodworking tools in hand, Keith meticulously carved intricate faces into several centuries-old live oak trees on St Simons Island.  Aptly named Tree Spirits, these faces are all unique and their stories are left to your interpretation.

From 1760 until the outbreak of the War Between the States, cotton and rice plantations flourished in this area. The Sea Island cotton grown here became famous the world over for its outstanding quality. Retreat Plantation was one of the most prosperous plantations and was located on the southern tip of St. Simons Island.